I was browsing through my blogs today, looking for topics and wondering why nothing seemed appropriate. Then I realized I’d committed the chief failing of my academic upbringing—analyzing causes when the time has come for action. So enough reflection. The upcoming election is more vital to the nation’s welfare than any in history. It’s time to wake up to what’s going on—to what’s at stake.

First, common sense. My daughter reported that on a recent hike, while enjoying the fellowship of her fellow hikers, she overheard a man behind her dismissing the national political crisis as a liberal conspiracy. “Just an ordinary guy!” she exclaimed. Right. And if you argued that a conspiracy of financial oligarchs is taking over the world, I’d be tempted to buy it. It fits with my prejudices. I hope my common sense would kick in and ask for evidence, but who knows. Trust is based on our sense of reality, which, like trust in our institutions, has been badly shaken. 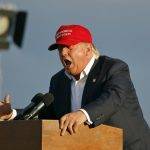 When trust leaves, fear takes over. For half of our citizenry, fear of change has morphed into conspiracy “theories.” For another unknown number, the whole mess has resulted in cynicism. That unknown number won’t vote at all. That leaves the rest of us. Of those, some will only vote in a Presidential election. It’s hard to work up the sense of urgency we brought to the 2020 election, but we must. Our belief in our own rationality and the rationality of others is at stake. 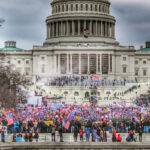 So is our belief that we are a people—that we share values of fair play, individual freedom, and justice. The political turmoil of the last six years has played to our fears and hates, loosened our sense of reality and our trust in our own judgment, made common sense an empty phrase. The isolation of the pandemic has turned us more and more to the internet which has hugely magnified the effect. We need to reassert our rationality.

Take Back the Flag
In Memoriam–Paula