One of the best story-weavers I’ve read this year is Jodi Picoult’s The Storyteller. Episode by episode, Picoult weaves the tale of the grandmother’s survival of the holocaust with that grandmothers imaginary gothic rendering on the same theme and the story of her Nazi brother persecutors to confront the heroine with a dilemma that brings them all into the present. I cannot tell you how all of this works or how the stories lead the heroine to surmount her own tragedy, but the result, despite its subject, is a tale of survival–and one that denies all the usual judgments. 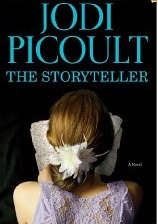 As a writer, I can’t claim such mastery, but I do know the way stories echo against each other. The novel that became The Inheritors seemed to produce side stories as it emerged. By hindsight, I can see that the derelict mansions of Chicago’s past had taken root in my imagination back in the days I did casework in an area that had once been home to the city’s wealthy. Their marble entries led to rooms housing entire families, nothing was left of chandeliers but dangling wires. All of this shaped my own view of the waves of immigrants replacing each other as the city grew.

From that center, almost ten stories bloomed and sent me researching into the city’s past. The papers of Jane Addams’ Hull House were a godsend, as were a number of books on Chicago’s history, but the stories are strictly fiction. The Irish/English steelworker who became an industrialist, the Italian labor leaders who gave birth to the heroine’s grandmother, the Hispanic leader who forced his way into the country club, the residents of those mansions themselves and their housekeepers all produced stories.

At one point in the writing, they threatened to overwhelm the ongoing story, so they had to be subdued, but the originals still live and are published in New Libri’s Coffee Break Shorts. I invite you to take a look. Amazon Prime members can get them free, but only for a limited time, $.99 for everyone else. Nowhere Else To Go, Chapter 1
Book Review: The Inheritors