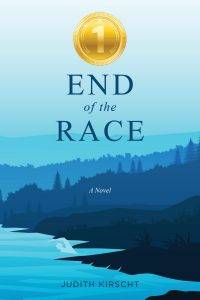 The culture conflict discussed in the last blog is a thread that runs throughout END OF THE RACE, a sub-plot but not the novel’s central focus. That came while idly reading a news article about a missing man and wondering “Why?” “What’s the story?” Those questions drive the story, but the content and depth arise from the author’s being.

For me, a story needs place before it can take shape, because setting gives birth to characters. We all have places where we’ve left a part of ourselves; the lakes and woods along Traverse Bay in Michigan (discussed in the “Inner Life” blog) are such a place for me—just waiting to be chosen. That Annika should be swimming springs from that setting, as does the love of the water that Annika and Brian discover in each other.

“No one urging her on, no lane markers, no whistles, no yelling crowd. Only her body releasing the weight of grief.” (p.1)

In that phrase, I recognize, by hindsight, an old bugaboo of mine about the American tendency to turn all into competition, but the race did not come fully into being until I turned my attention to Brian and the story of their childhood. As that story unfolded, I began to love the exuberance of the race and the center it gave to the children’s lives. Stories, left to themselves, carry you to places you never thought you’d go.

As stories proceed, disparate bits of my life experience may find release with no conscious direction from me. In Annika’s frantic state of mind during the first days of Brian’s disappearance, I recognize my own clutching panic during the three days my sixteen-year-old was missing—that first frantic searching through friends, family and school. But then I floundered in space; I remember ironing for the sole purpose of staying grounded. Come to think of it, Annika does this too, but I was never able to keep turning fear into action as Annika does. Frequently, our characters are the people we wish we were.

As other characters emerged, so did the split between families, again spontaneously, and the story became much more.

“… they were happy enough to separate themselves from the post-Vietnam acrimony that divided Brian’s father and Uncle Joe—a mutual contempt that had grown old, soft and fuzzy around the edges. They’d even managed to ignore the hatred of Wolfsons that consumed Annika’s father, still raw and virulent.” (p.21)

This conflict I recognized as one that has found its voice in several of my novels, but set in 2007 the characters took the story on a different path. John Gardner’s core edict, in On Moral Fiction, is that you must love your characters—you must be willing to walk in their shoes. I had the good fortune to have Gardner read my (still unpublished) first novel, and he pointed his finger here and here again where I’d failed this test. END OF THE RACE is a prime example of its importance. In the first draft, Brian came across as something of a jerk (according to my critique group). So I sat down and started writing episodes of the pair’s childhood from Brian’s point of view. I was amazed at how easy it was to walk in his shoes and, by extension, the shoes of characters on both sides of the Sixties culture split. Doing so gave the story much needed depth. It is still the mystery of Brian’s disappearance, but is now a story of why people do what they do, and escaping the bitter split of their parents’ generation becomes a part of that.

The magic of fiction is this transformation of our own understanding, both in the writing and the reading, and writers are born from readers. The triggers are themselves fascinating because they are mysterious, inexplicable, but the stories transform our perspective on issues that plague us, leading to resolution.

Another View: WHY WE’RE POLARIZED, by Ezra Klein
Polarization in NOWHERE ELSE TO GO